Los Angeles, Jan 26 (IANS) 'Elvis' star Austin Butler may have received his first-ever Oscar nomination but he is not forgetting where he came from. 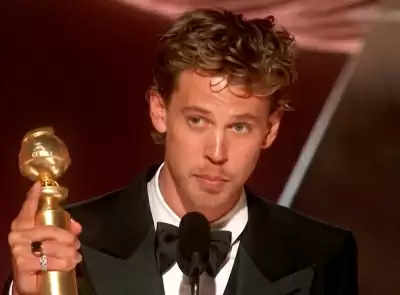 Los Angeles, Jan 26 (IANS) 'Elvis' star Austin Butler may have received his first-ever Oscar nomination but he is not forgetting where he came from.

The 31-year-old actor's IMDb biography was penned by his "proud parents," David Butler and his late mom Lori Butler in 2007, and has been kept the same to this day, reports People magazine.

In the biography, his parents sweetly raved about their son's early acting career that began after he landed "a rather permanent background-acting gig" on the Nickelodeon series, Ned's Declassified School Survival Guide in 2004, and "from that point on, he considered himself to be a serious actor."

According to his parents, Butler's "first named (albeit uncredited) character was 'Toby' in the Hannah Montana episode 'Oops, I Meddled Again' in 2006 (girl broke up with him)."

Then his "first speaking role was in 'Zoey 101' as 'Dannifer' or 'Wrong Danny' (a few lines, and a girl poured soda down his shirt)." They joked that while he got a "meatier role on Hannah Montana in 2007" it was "still a small part, but very fun."

They added: "a few more lines, and he got to fling popcorn on Miley Cyrus."

Butler explained during an interview with Vogue last April that his parents "divorced amicably" when he was seven and that he and his older sister, Ashley, "moved fluidly" between their respective houses throughout their childhood.

According to People, the actor spoke fondly about his childhood and remembered his mother, who died in 2014 from cancer, while hosting 'Saturday Night Live' in December.

"Some of my favourite memories from growing up are watching SNL with her, and we'd watch every week," Butler shared during the show's opening monologue, quoted by People. "And even though I had this crippling shyness, when I was with her, I'd just do anything to make my mom laugh," he added.