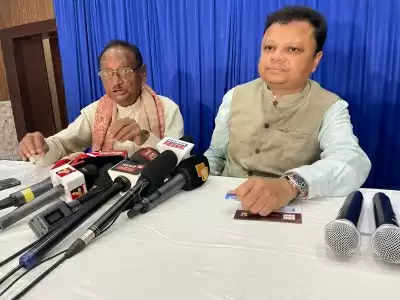 The father-son duo, who had joined the BJP in 2015 after quitting Congress, announced their resignation from the primary membership of the party at a press conference here on Wednesday.

They have sent their resignation letters to BJP President J.P.Nadda.

"I realised that I am unable to discharge my political, social and moral duty to my people in Odisha during the last several years. Hence, I tender my resignation from the primary membership of the BJP with immediate effect. Please accept the same," the former Chief Minister said in his resignation letter.

Giridhar Gamang, a nine-time MP, thanked Prime Minister Narendra Modi and Home Minister Amit Shah, for clarifying on the floor of Parliament on his voting against the Vajpayee government in 1999.

Similarly, Sishir in his letter said he resigned after realising that he was unable to do much for the welfare of the tribal community and the youth during the last several years.

He also announced that he will not contest in the elections anymore as he is old. "My son Sishir will contest," the tribal leader said.

The father-son duo further said that their resigned also stemmed from being humiliated within the BJP.

"Insult is tolerable but not humiliation," said the former Chief Minister.

Sishir said the BJP had promised him to give a party ticket for the Koraput Lok Sabha seat in 2019. However, he was given a ticket for the Gunupur Assembly seat from where he lost with a dismal show.

"No one has helped me in the 2019 election. After the election also, the entire party in the Koraput area was working under the behest of one leader and no importance was given to me," he added.

Wednesday's development comes after the father-son duo met the Telangana Chief Minister in Hyderabad on January 13.

Senior Gamang is likely to be appointed as the Odisha President of the BRS to lead the party in the 2024 elections, sources said.

Sishir is likely to contest the next poll on a BRS ticket, they added.