New Delhi, Jan 22 (IANS) India's first line of Defence, Border Security Force, has pulled up its socks and tightened security along the Pakistan border to prevent any untoward incident during the Republic Day celebrations. 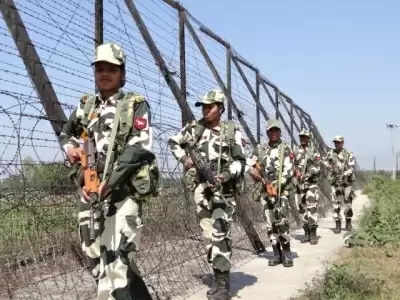 <br>As per information, the BSF has issued an alert in Jammu and Kashmir, Punjab, Rajasthan and Gujarat, all states bordering Pakistan, to counter any attempts of infiltration.

To foil, infiltration attempts from across the border under the cover of fog and mist, the BSF is on high alert.

In Rajasthan, the BSF has started operation 'Sard Hawa' under which the officials of the Force will conduct patrolling along the border fences on vehicles and camels.

A BSF official said that the areas, inaccessible with vehicles, will be manned by patrolling with help of camels. Rajasthan has many sandy ares where partolling is done by camels.

During operation 'Sard Hawa', till January 28, all officials of the Sector Headquarters will stand along with Jawans near border fence to boost their morale.

The official said that the BSF is running a special surveillance campaign.

During this operation along the border, the BSF's intelligence will also be active. Besides, other intelligence agencies will also coordinate for the security. Every suspicious activity is being monitored.

In Jammu and Kashmir, vigil has been stepped up along the international border and LoC.<br>There is a possibility of infiltration from the across the border by intruders who are waiting at the launch pads to sneak into Indian territory. As per information, terrorist organisations and ISI are trying to infiltrate terrorists and weapons from across the country to counter which the Army and BSF have stepped up the vigil.

As per information, the BSF has stepped up vigil and electronic surveillance in small streams and three rivers in Jammu.

Security has been tightened in Harami Nala area in Gujarat, where BSF jawans are patrolling round the clock.

BSF sources said that in Punjab, drones are being used to send weapons and drugs. Attempts are being made to supply weapons to the terrorists through smugglers and spoil the environment of the country. Vigil is being kept along Punjab border with drone systems and other modern equipment.