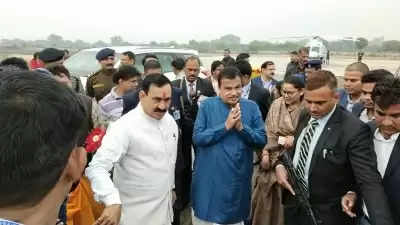 Shri Peetambra Peeth, which is also called Shakti Peeth Or Tapasthali (place of meditation) is an ancient temple with a big Asharam in Datia, is located around 40 km from Jhansi railway station in Madhya Pradesh's Bundelkhand region.

Being local politician from Datia, Narottam Mishra, who has been winning the elections since 1990 and became minister first time in 2005, would personally receives provide political personalities visiting to seek blessings of at Shri Peetambra Peeth in Datia.A

In political circles of Madhya Pradesh, it is well-known that even if a non-BJP politician visits Datia to offer prayers at the renowned temple, Mishra welcomes them and arranges a guest house and food for the visitors.

About Datia temple, a mythological belief is that Venkateshwar Shiva belongs to the same age as that of Mahabharata. This place is also famously called - 'Satta Ki Devi' (Goddess of Power). Big politicians have always made a beeline here to seek blessings.

Reports suggested that during India - China War in 1962, the then Prime Minister Jawahar Lal Nehru had visited Datia temple and '51 kundaliya' mahayagya was performed. India's first Chief of Defence Staff, General Vipin Rawat had also visited Datia to offer his prayers here a few months before he died in a tragic plane crash.