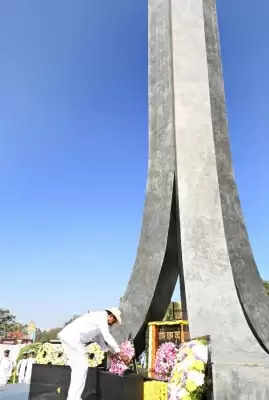 The chief minister, who skipped the Republic Day event at Raj Bhavan, also paid tributes to the martyred soldiers.

KCR, as the chief minister is popularly known, garlanded the portraits of Mahatma Gandhi and architect of India's Constitution Dr. B. R. Ambedkar and paid floral tributes to them.

On this occasion, the chief minister remembered their services to the country.

After unfurling the national flag, KCR visited the Army War Memorial in Secunderabad. He laid the wreath and paid floral tributes to the valiant soldiers. He remembered the sacrifices of fallen soldiers.

Both the governor and the chief minister greeted people on 74th Republic Day.

The governor stated in her message that 73 years ago, India became a Republic, where the people have the collective power to design their destiny.

"This is the day to celebrate our democratic and Republic country and be proud of its sovereignty. I offer my greatest tributes to Baba Saheb Dr. BR Ambedkar and other architects of our great Indian Constitution who enshrined the noble principles of liberty, equality, and fraternity," she said.

"At a time when the country is celebrating the Azadi Ka Amrit Mahotsav - the 75 Years of Independence, and India's presidency of G20 countries, it is important for all of us to take forward the spirit of Republic day among all sections of the people," she added.

KCR in his message said that the aspired goal of the Indian Constitution will be accomplished only through the effective democratic governance with equality. He extended greetings to the people of Telangana and the country on the 74th Republic Day.

He said that January 26 is a day of celebration for all citizens of India when the constitutional governance was first burgeoned as a sovereign republic democratic country. The chief minister said that the people of this country will always remember the efforts of the authors of the Constitution of India for drafting the largest Constitution in the world.

He observed the main characteristics of India is framed with unity in diversity like a bouquet of socio cultures, traditions, languages and customs. He said that the country will move further on the path of progress and welfare only when the federal spirit prevails in India, which is flourishing as the federation of states and justice, freedom, equality and brotherhood as the main pillars of the governance.

KCR called upon the people of the country to thoroughly understand the holy Constitution in which we dedicated ourselves by declaring India as a Sovereign, Socialist, Secular, Democratic and Republic state and make more efforts to achieve the aspirations.