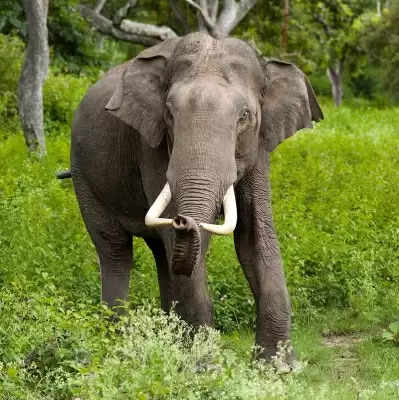 A special team of 82 forest officials including Dr Zachariah and his team has been trying to tranquilise the elephant which was creating havoc in human settlements at Dhoni in Palakkad district of Kerala.

The forest team commenced the operation on Saturday early morning but the elephant went into the deep forest along with other elephants and was stationed at a steep slope.

Dr Arun Zachariah, while speaking to media persons on Saturday, said that they did not fire the dart at the elephant as the immediate reaction of the elephant would be to run and if that happened, the possibility of the elephant falling down from the slope and hurting itself would be greater. The special tracking team of the forest department had been keeping the elephant under its radar since yesterday afternoon when the operation was called off.

Early on Sunday morning, the special team tracking the elephant informed Dr Arun Zachariah and his team that the elephant was in a plane land. The team started from the Palakkad guest house by 5 a.m. and then they walked into the forest.

Forest department officials told IANS that the dart was fired at 7.15 a.m. The elephant is still under the effect of tranquilser and three kumki elephants, Bharath, Vikram, and Surendran are surrounding the elephant.

JCB and Lorry have been brought to the forest to carry the elephant into the specially-made eucalyptus enclosure.

Padmanabhan Nair, a local farmer while speaking to IANS said: "This is a dangerous elephant that has killed people including Sivaraman, a morning walker last January, and we are heaving a sigh of relief."

It may be noted that in Dhoni, even autorickshaws did not ply at night and several people moved out of the area as farm and agricultural lands were destroyed by this elephant.

The Kerala forest department officials told IANS that if the elephant loses the effect of the tranquiliser, veterinary surgeon Dr Arun Zachariah and his team are ready for firing a booster dart at the elephant.

Sources in the forest department told IANS that the two kumki elephants Vikram and Bharat will stay on both the sides and Surendran will push the elephant from behind to lift the elephant into the lorry which is ready.