Modi spells out social engineering mantra for BJP's success beyond 2024

New Delhi, Jan 22 (IANS) While all political parties are aiming at the Lok Sabha Election 2024, the Bharatiya Janata Party is looking for success beyond 2029. 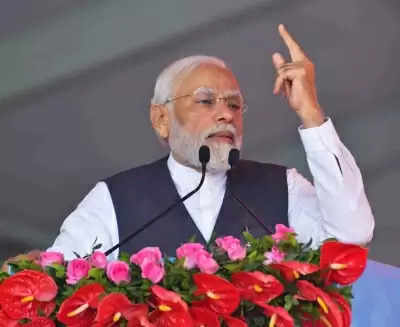 Prime Minister Narendra Modi gave a mantra for the party's success not only in 2024 but also beyond 2029 in the National Executive meeting held earlier this week.

The BJP is in election mode and gearing up for the Assembly as well as the Lok Sabha polls. While its executive members were waiting for PM Modi to speak more on the upcoming elections, the PM surprised them by not talking much on 2024 instead he did give a peep on the success of BJP beyond 2029.

According to multiple sources, "His message was more about bringing people together - like reaching out to Muslims and communities that have not voted for the saffron party and organising festivals like the Kashi Tamil Sangamam - to unify India in a true sense.

The Prime Minister, who has great observation and perseverance, talked about the cultural events like Kashi Tamil Sangamam that helped in achieving the unity among the people of Kashi and Tamil Nadu to celebrate their cultural ties and religious belongingness. This can eventually help people outgrow the language divide, which has been so strong, and the north-south divide that has become a character of politics in the southern states.

PM Modi emphasised on organising more of such events in other states so that there could be more harmony in the country beyond the language, caste, religion, culture and tradition barriers.

In the previous national executive held in Telangana, PM Modi had asked the party leaders to indulge in social engineering and reach out to sub-castes or backwards in other communities. These are the people that will make a difference if or when a certain community is upset with the party over any issue.

With Modi seeking a third term in 2024, the BJP is tasked with expansion to communities like Pasmandas and Bohra Muslims.

A clear message has emerged from the BJP's National Executive meeting to expand the party roots by connecting with people from all communities even if they are not BJP voters. Also giving vision for 2029 and beyond depicts PM Modi has given the result of Lok Sabha election 2024 in BJP's favour.

The party feels that by 2029, it needs to end regional, caste and linguistic divides in the country. Even regional parties will not be a hindrance to the BJP's vision of Bharat. Once the base is strong, the party will be able to easily implement ideological agendas that have been on its list since its foundation.

The vision of unifying India in true sense is what PM showed to the BJP members in the National executive meeting, which was a crucial meeting for the upcoming state elections, Lok Sabha election 2024 and also from the perspective of the G20 summit.