Bhopal, Jan 22 (IANS) The BJP has geared up for the upcoming assembly elections in Madhya Pradesh as the party has started preparations to bring the government, organisation and all the leaders to the ground level. 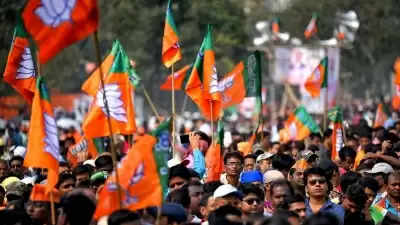 The main focus of the Bharatiya Janata Party this time is on the 103 assembly seats where MLAs belonging to Congress and other parties are there.

In the assembly elections held in the state in 2018, the BJP lagged behind the Congress and even lost power.

However, the party returned to power due to the defection of Union Minister Jyotiraditya Scindia, and also won the bypolls, but the party is worried about the upcoming elections. This is the reason why all the big leaders are being made partners in the election campaign.

According to the information received from BJP sources, a meeting of the State Working Committee is going to be held in the coming days, in which ministers of the state government, MLAs, MPs, besides central ministers are being called. This meeting is very important for the upcoming polls as the road map for the elections can be finalized in this meeting.

If party sources are to be believed, the BJP is eyeing most of the 103 assembly seats which are held by Congress, Bahujan Samaj Party, Samajwadi Party or independent candidates.

BJP has been engaged in ground preparation for a long time regarding how these seats can be won. Now all the big leaders of the party are sitting together trying to implement the feedback received from the grassroots level.

Party sources say that on the 127 seats in the state where the BJP has sitting MLAs, the displeasure of the general public can be reduced by changing the face of the candidate and by making other efforts

It won't be very difficult to win the 103 seats where the opposition MLAs are there because resentment is there towards the MLAs of those areas and it is easy to cash in on that.

BJP has been continuously gathering ground feedback for more than a year and on the basis of this, the party has made up its mind to work on the upcoming strategy.

In the meeting of the National Working Committee held in Delhi recently, some instructions have been given to the prominent leaders of the state and to take these instructions to the lower level, a gathering of big leaders is going to be held in Bhopal in the coming days.