Ram Rahim cuts cake with a sword to celebrate his parole

Baghpat (UP), Jan 23 (IANS) Dera Sacha Sauda chief Gurmeet Ram Rahim was spotted celebrating his freedom by cutting a cake with a sword. 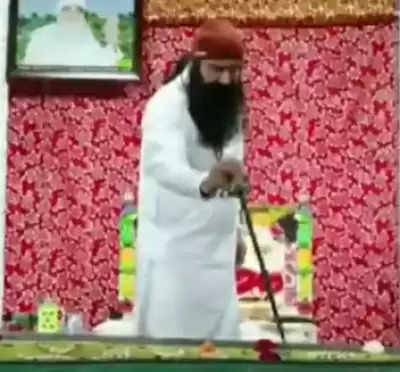 Baghpat (UP), Jan 23 (IANS) Dera Sacha Sauda chief Gurmeet Ram Rahim was spotted celebrating his freedom by cutting a cake with a sword.

Ram Rahim reached his Barnawa Ashram in Baghpat on Saturday after he got a 40-day parole from court. He has been serving a sentence for rape and murder in Rohtak's Sunaria jail.

A video of the Dera Sacha Sauda chief cutting the cake during parole has raised several eyebrows. Several followers joined him in his celebration.

Cutting cakes with swords which are banned since they amount to public display of weapons under the Arms Act.

This is the second time Ram Rahim has requested 40-day parole to attend an event. He was previously released on parole for 40 days in October 2022.

He was also granted parole in advance of the Haryana panchayat election and the Adampur Assembly byelection. On June 17, Rahim was granted a month's parole.

The Dera head has been imprisoned in Haryana's Sunaria jail since 2017, where he is serving a 20-year sentence for raping two female disciples at his ashram's headquarters in Sirsa.

In August 2017, a special CBI court in Panchkula convicted him of raping two female followers.