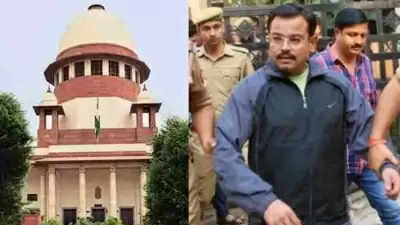 A bench headed by Justice Surya Kant directed Ashish Mishra not to enter Uttar Pradesh except when required to attend the trial court proceedings.

The bench further directed him to leave the state within a week of his release and also asked him not stay in NCT-Delhi.

It emphasized that any threat to witnesses by the accused or family will result in cancellation of bail, and Ashish Mishra will also have to inform court about his location.

The bench has set the next date of hearing to March 14.

The apex court decided to monitor the Lakhimapur Kheri trial, and asked the trial judge to send progress reports after every date of hearing.

Four accused in jail in connection with the cross-FIR under murder charge in the case will also be released on interim bail.

The apex court had reserved its order on Ashish Mishra's plea on January 19.

During the hearing, Additional Advocate General for Uttar Pradesh Garima Prashad opposed Ashish Mishra's bail plea, submitting that it was a grave and heinous crime and granting bail will send a wrong signal to society.

Senior advocate Dushyant Dave, appearing for those opposing the bail plea, said grant of bail will send a terrible message to society.

"It is a conspiracy and a well-planned murder. I will show it from the charge sheet. He is the son of a powerful man being represented by a powerful lawyer," he said.

On October 3, 2021, eight people were killed in Lakhimpur Kheri district's Tikunia in a violence that erupted when farmers were protesting against Uttar Pradesh Deputy Chief Minister Keshav Prasad Maurya's visit to the area.

According to the Uttar Pradesh Police FIR, four farmers were mowed down by an SUV, in which Ashish Mishra was seated.

Following the incident, a driver and two BJP workers were allegedly lynched by angry farmers. A journalist also died in the violence.

On December 6 last year, a trial court had framed charges against Ashish Mishra and 12 others for the alleged offences of murder, criminal conspiracy and others in the case of death of the protesting farmers, paving the way for the start of the trial.

A total of 13 accused, including Ashish Mishra, have been charged under IPC sections 147 and 148 related to rioting, 149 (unlawful assembly), 302 (murder), 307 (attempt to murder), 326 (voluntarily causing grievous hurt by dangerous weapons or means), 427 (mischief) and 120B (punishment for criminal conspiracy), and section 177 of the Motor Vehicle Act.