Srinagar Jan 23 (IANS) The youth of Jammu and Kashmir, especially the women, are now beginning to believe in self-employment. 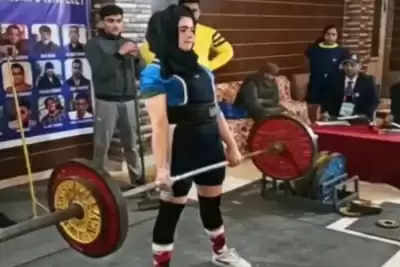 In the past few years, many women have come forward who broke the stereotypes and stood on their own feet and not only earned self-employment, but also played an important role in the development of the society.

A good example of this can be taken from Arifa Bilal and Razia Mushtaq, two talented women from the central district of Ganderbal, who broke taboos in the district and achieved success.

The first fitness centre of its kind for women in the district was established by Arifa Bilal in 2017, while Razia Mushtaq, along with her, this year started another fitness centre in the Kangan area for women only.

Apart from being a fitness trainer, Arifa Bilal is the first woman from Jammu and Kashmir to win a gold medal in powerlifting at the national level.

Arifa Bilal has made a name for herself and her country by winning multiple state and national level gold medals in martial arts.

Apart from this, she has won national awards in volleyball as well as in various other sports.

Arifa is now running a fitness centre in her district to provide a platform to other aspiring female athletes.

Razia and Arifa faced many challenges and criticisms in starting a gym centre, but these talented girls did not take them seriously.

According to Razia, the love and support of her parents and friends encouraged her to move forward with confidence.