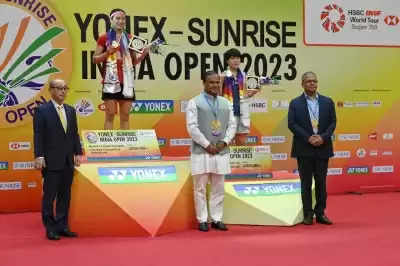 Vitidsarn, who had lost all six men's singles matches against top seed Axelsen before Sunday, engaged the tall Dane in long rallies in the decider before prevailing 22-20, 10-21, 21-12 in an hour and four minutes before Young got the better of Japan's Akane Yamaguchi 15-21, 21-16, 21-12 in just over an hour at the BWF World Tour Super 750 event organised by the Badminton Association of India.

The Thai shuttler was the underdog going into the summit clash against Axelsen, who had last lost a final in May 2021 and had been unbeaten in 13 thereafter, but showed little nerves as he stuck to the game plan of controlling the pace of the rallies and push the Olympic and world champion into longer rallies.

The game plan allowed Vitidsarn to open up a 16-13 lead before Axelsen clinched five straight points to take the lead and soon earned a game point. But a lucky net chord allowed the former junior world champion to draw level and he then clinched two straight points to win his first game against the Dane on the 13th attempt.

Axelsen roared back in the second, racing through the game. But Vitidsarn managed to regroup himself and engage his opponent in long rallies. The top seed clearly looked more tired than his opponent during the business end of the match and handed the Thai his first Super 750 crown with an unforced error while returning a short serve.

"From my earlier losses against Viktor, I had learnt that if I could engage him in long rallies and take the match to the decider then I have a chance to win. I managed to do that today and even after losing the second game, I believed that I could win," Vitidsarn said.

Earlier, Young avenged her last week's Malaysian Open final loss against Yamaguchi, with yet another clinical performance in her maiden India Open appearance.

Yamaguchi was in complete control in the opening game but Young managed to turn the tables in the second to force the decider. The Japanese had the upper hand in the initial exchanges of the third and final game before the Koreans managed to win 8 of the nine points from 4-7 down.

The two players then engaged in a couple of 30-plus stroke rallies and one 51-stroke rally and though Young lost those, Yamaguchi was the one who looked more tired after that and the Korean's superior stroke play helped her seal victory.

The Japanese mixed doubles pairing of Yuta Watanabe and Arisa Higashino and the women's doubles combination of Nami Matsuyama and Chiharu Shida grabbed the titles without hitting a shuttle as their respective opponents withdrew citing illness.